Val Kilmer’s daughter, Mercedes Kilmer, reveals what it was really like working with her dad in ‘Paydirt’

EXCLUSIVE: Val Kilmer’s daughter, Mercedes Kilmer, didn’t know what to expect when it came time to share the screen with her father.

The 28-year-old and the 60-year-old are starring in the thriller “Paydirt” about a parolee who teams up with his old crew determined to find a buried bag of cash stolen during a DEA bust gone bad.

“My dad’s never really seen me act before,” Mercedes told Fox News. “It’s something that’s been kept quite separate from my parents. But he’s a really great actor, so I just felt honored. It was really an exciting challenge to not only work with my dad but to play my dad’s daughter.”

Mercedes noted it was “historic” to have a lead actor with a speech disability star in an action flick. The “Top Gun” star went public with his throat cancer diagnosis in 2017 and underwent a tracheotomy that impacted his speech.

“I’m so proud of him because he has no issues now,” said Mercedes. “And even if he wasn’t my dad, I would feel so proud of him. It feels like the entertainment industry is finally changing. And there are so many more artists who different disabilities and different backgrounds who can now finally get visibility. It’s just a really exciting moment to be a part of.”

Mercedes is no stranger to being in the spotlight. Her mother, Joanne Whalley, is also an actress who has led a successful decadeslong career. Her brother, Jack Kilmer, has also followed in their famous father’s footsteps and pursued acting.

“I remember thinking it was strange that other people’s parents didn’t do what my parents did,” Mercedes reflected on her childhood. “I would be like, ‘Oh, your parents had one job forever?’ I remembered that blew my mind because my parents would spend one year in 1867 for one job and then in the future for another. I didn’t realize other people would have one job.”

Mercedes explained she grew up in New Mexico, away from Hollywood’s glaring spotlight when she enjoyed a more private life. The starlet was surrounded by friends and family who were also in the entertainment industry so she didn’t feel “like a complete freak.”

While Mercedes said she has always been passionate about performing, she was worried about being compared to her father in Hollywood. 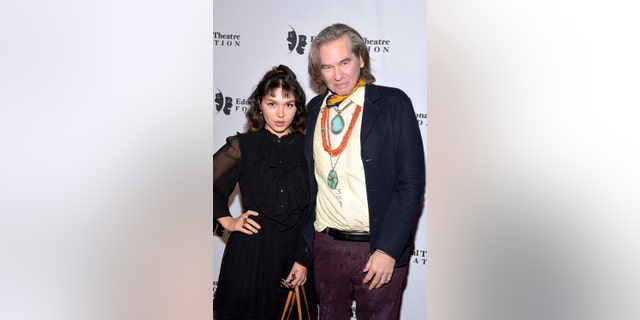 “I think that’s why I’ve done theater,” she explained. “I knew I loved acting, but I didn’t know until quite recently that I would be involved in the public part of it. Now that I’m older and have a much stronger sense of self-identity, it doesn’t bother me. It doesn’t threaten my identity. If anything, it excites me to prove what I’m capable of. And my parents have always been supportive of my dreams.”

“When I was younger, I didn’t understand that,” she shared. “I sort of shied away from really acting publicly because of that. … But now I just think it’s really cool. And I’m so proud of my family.”

Mercedes insisted that when it came to “Paydirt,” Kilmer gave her the freedom to express her talent.

“He didn’t give me any pointers, which is something I’m really grateful for,” she said. “It must have been difficult for him because he loves talking about acting and he’s so passionate about the craft, but he respectfully allowed me to have my own experience with it. It was nice to integrate his love for acting into our relationship, especially growing up and witnessing that. [This film] hasn’t changed our relationship. If anything, it only made it better.”