Santa Claus Rescued by Firefighters After Getting Stuck in Power Lines 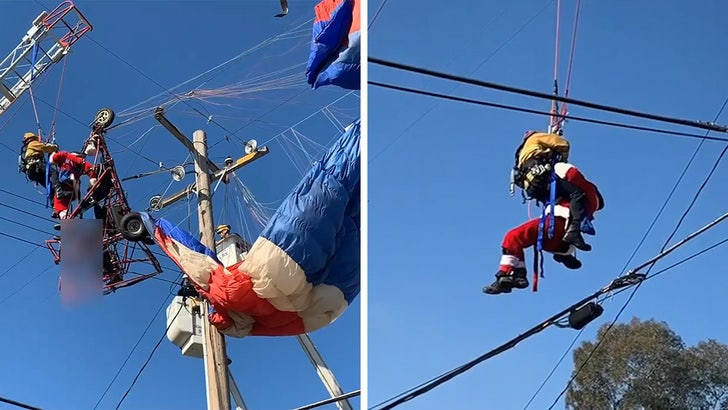 If Santa Claus is gonna come to town, successfully, he’s gonna have to keep a better eye out for power lines … and he’s damn lucky some mere mortals saved his ass this time.

A man dressed as Saint Nick had to be helped down by firefighters Sunday morning in Sacramento after he somehow got his powered parachute vehicle snagged in some utility wires … leaving him awkwardly dangling, helmet still on and all.

As for how this happened, apparently the guy’s a local who often gets airborne with his motorized aircraft, and he was trying to do something nice for the kids by handing out candy canes from the sky. Seems one of his reindeer led him astray and straight into this.

Santa wasn’t harmed, which is noteworthy as this screw-up could’ve gone awry in a hurry. Sacramento Metro and CHP responded to the scene, and were able to successfully roll out the hook and ladder to rescue the dude … shutting off power to about 200 residents in the process. Of course, they also poked some fun at the situation on social media.

Not a miracle on 34th Street, per se … this happened near 7th Ave in Rio Linda. Still, pretty good omen for next week.

2020-12-21
Previous Post: Thoughtful present ideas you could have had if you were a better person
Next Post: Hilaria Baldwin shows off post-baby body 3 months after welcoming 5th child