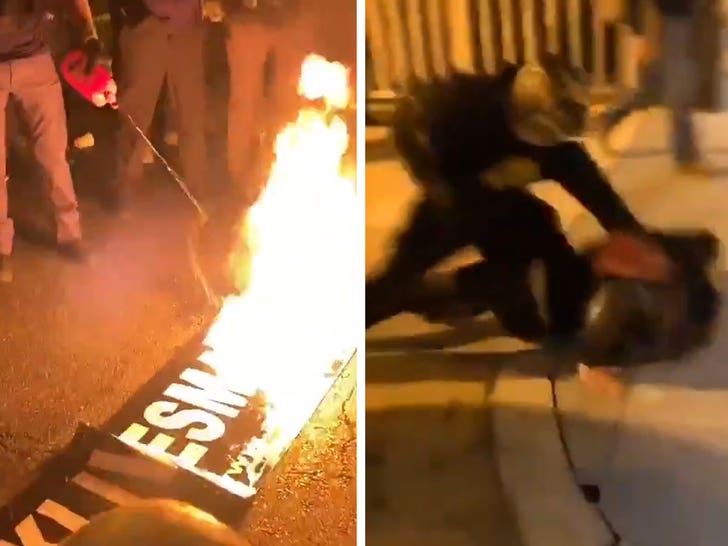 A Pro-Trump rally in Washington D.C. turned violent Saturday night as members of Proud Boys and Black Lives Matter protesters clashed … and it was ugly.

Donald Trump’s Proud boys got the message loud and clear.

“The fight has just begun.”

Here is a video of them chasing and beating a couple.

This is ugly to watch.pic.twitter.com/n8COWZiyJL

Proud Boys protesters viciously attacked a couple … beating on them as they tried to escape. Members of the far-right group burned a Black Lives Matter banner, and the vandalism and violence escalated as the night wore on.

10 people were arrested for assault, 6 for assault on a police officer, 4 for riotous acts, 2 for crossing a police line and one for possession of an illegal weapon.

Check out the videos … you hear one of the Proud Boys say, “The fight has just begun.”

DC: Antifa/BLM begin to lob explosive projectiles at Trump Supporters outside of their hotel

At one point cops formed a human barricade in an effort to separate the 2 groups, and almost immediately explosive projectiles were hurled at the crowd.

2020-12-13
Previous Post: Boris Johnson to remember it’s Brexit deadline day at about 4pm
Next Post: Ashanti reveals she’s tested positive for coronavirus ‘Never in a million years did I think I would get COVID’