EXCLUSIVE: Caroline Aaron says she “got the golden ticket” when she joined the cast of “The Marvelous Mrs. Maisel,” an Emmy favorite that has racked up 54 nominations and 16 wins since it premiered in 2017.

“I’ve done a lot of work and have been at it a long time – so there’s no such thing as jaded when you get handed this jewel,” Aaron told Fox News of the Rachel Brosnahan-led Amazon original about a young housewife gifted in the art of stand-up comedy in a male-dominated realm in the 1950s and early ’60s.

“You’re invited to this party and you go, ‘Oh, my God. I’m so excited.’ And every time I work and every time I’m around all of these people, I mean, I would say that [it’s] the genius of [creators] Amy and Dan Sherman-Palladino because they start with a blank page,” she said. 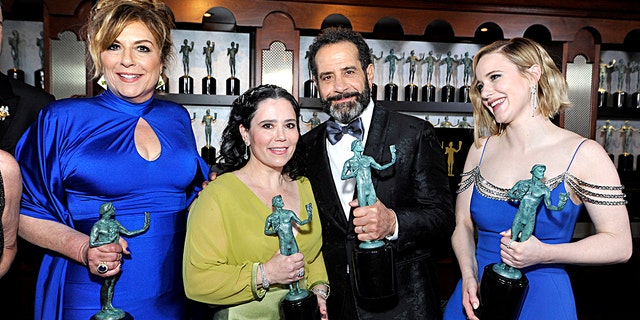 Caroline Aaron, Alex Borstein, Rachel Brosnahan, and Tony Shalhoub, winners of Outstanding Performance by an Ensemble in a Comedy Series for ‘The Marvelous Mrs. Maisel’, pose in the trophy room during the 26th Annual Screen Actors Guild Awards at The Shrine Auditorium on January 19, 2020, in Los Angeles, California.
(John Sciulli/Getty Images for Turner)

In the film, Aaron plays the main characters, Judy Baxter and Carol Lane. The “Edward Scissorhands” actress said she had to juggle portraying two women whose lives inadvertently impact one another despite never having met.

“I think in a way, it was a little bit more difficult, strangely enough, playing Carol Lane, because as much as I don’t biographically line up with Judy Baxter, I’m not the Beverly Hills housewife, was not part of the Holocaust and my parents weren’t survivors of any of that kind of stuff,” said Aaron, noting that since the movie was filmed prior to her role on “Mrs. Maisel,” she felt it easier to encompass the roles of two completely different women.

“But Carol Lane … who is sort of selfish, self-centered, not very kind – I have certainly crossed paths with that in this profession,” Aaron said. “To be that person was a little bit more difficult because I suffer from ‘nice girl syndrome’ as I’m sure a lot of people do. And the idea of mistreating people would be very hard for me. But it was kind of fun. You know, I got to play a villain in a sense – a villain who was redeemed in a way that the audience will find out. But if you’re in any part of the entertainment business, we’ve met this woman in one way or another.”

Aaron, whose guest-starring appearances in high-profile titles alone rival those of even the most accomplished actors, said she’s over the moon that interest in women-driven stories “are just now coming to the front line.”

She anticipates that Midge Maisel will go down in the same breath as Fran Fine in “The Nanny” and Lucille Ball in “I Love Lucy.”

“I think Midge Maisel – I’ve said this to people – I think this show will go down in history in the way that ‘That Girl’ (1966-1971) did with Mary Tyler Moore,” said Aaron, who is also a longtime acting coach. “I mean, all of these shows where they have a heroine at the center who, Midge, for her time period is way ahead of her time.

“Now, we don’t think of anything with a female stand-up comic. We embrace them, we look forward to them. But it took a lot of courage in those days to kind of break out of the pack. And Rachel [Brosnahan] is divine. No question about it.”

The Richmond, Va., native, whose mother in 1965 began as a lecturer at Virginia Union University, a historically Black university, said she developed much of her front-line racial and gender activism from her mom, who grew up in Selma, Ala.

The “Angst & Daisies” podcast co-host likened the job “Maisel” is doing with the issue of women’s representation to the task “Hairspray” achieved in opening people’s eyes to the perils of racism in 1988.

“It’s really exciting. I describe the show to people as a Trojan horse,” she said. “And what I mean by that is my daughter went to the Rhode Island School of Design and one of the graduation speakers was [filmmaker] John Waters, and he said to the kids, ‘Don’t try and be more outrageous than we were. You’ll never accomplish that. We went to the edge,’” she said of the “Female Trouble” and “Cry-Baby” director.

“He said, ‘As young artists, your job is to build Trojan horses.’ And he said, ‘I wrote a musical called ‘Hairspray.’ It’s a show about racism and it went all over the country into every small racist town in America and nobody knew that they were getting a lesson in tolerance while they were watching the show.’”

“And I feel the same way about ‘Maisel,’” added Aaron. “It’s a great Trojan horse. You’re looking at something beautiful and delightful and funny. But underneath all of that and inside all of that, I think is some very important things that the creators are talking about.”

Season 3 of “The Marvelous Mrs. Maisel” is slated to return on Dec. 6.