Joe Exotic‘s team is heading back to our nation’s capital for another shot at getting the Tiger King pardoned by President Trump … and this time, they got an in at the White House.

Sources tell TMZ … Joe’s squad of attorneys and advocates will be flying to Washington D.C. Wednesday to hand-deliver a copy of their official pardon request to a contact they have at 1600 Pennsylvania Ave.
The hope it seems … to get the pardon request in front of Trump, and we’re told Eric Love — who’s leading the team — has a contact within the White House, so it would seem this might be their best chance yet to get DT to listen. 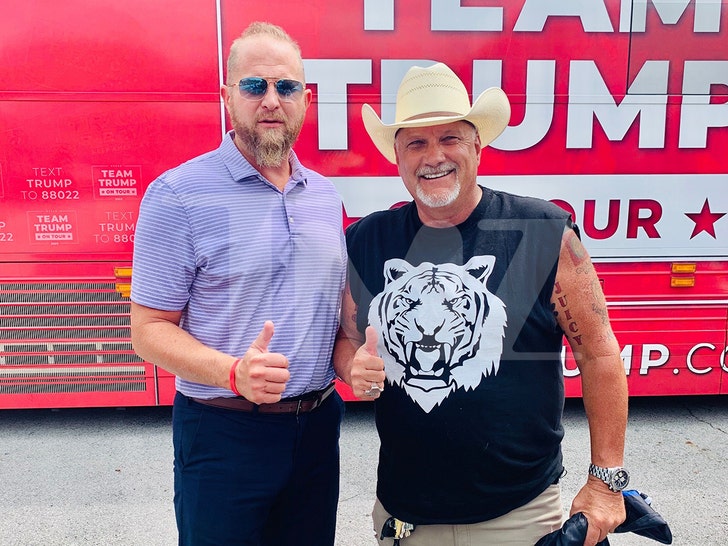 Not just that, but it would appear the Joe Exotic squad has more Trump allies than just one — here’s a photo of Eric with Brad Parscale, 45’s head of digital operations for his campaign. Eric and the team met Brad in Texas recently, but also … he’s not the contact they have at the White House. Still, knowing BP can’t hurt their odds!

Remember, Love and co. rolled up to D.C. a few months ago in a huge bus with a ‘Pardon Joe Exotic’ wrap. It doesn’t appear that venture was all that successful — Trump hasn’t pardoned the guy after all — but we know Joe’s on Trump’s radar.

He actually brought up Joe’s name recently in a press conference, and said he’d look into his case. No better time than now, right?!?

2020-09-07
Previous Post: Nickelodeon pulls ‘Made By Maddie’ following backlash
Next Post: Kaitlyn Bristowe breaks into tears after ‘trolls’ slam her appearance: ‘It got to me’