Jimmy Carter has set the record straight about who joined Willie Nelson in smoking pot on the roof of the White House during Carter’s presidency.

It wasn’t a White House staffer member, it was one of Carter’s sons.

“When Willie Nelson wrote his autobiography, he confessed that he smoked pot in the White House one night when he was spending the night with me,” Carter, 95, says in the new documentary, “Jimmy Carter: Rock & Roll President” released Friday, according to the Los Angeles Times.

“And he says that his companion that shared the pot with him was one of the servants in the White House. That is not exactly true — it actually was one of my sons, which he didn’t want to categorize as a pot-smoker like him.”

The documentary explores the Democrat’s relationships with several musicians, including Bob Dylan and the Allman Brothers, during his time in the White House, 1977-1981. 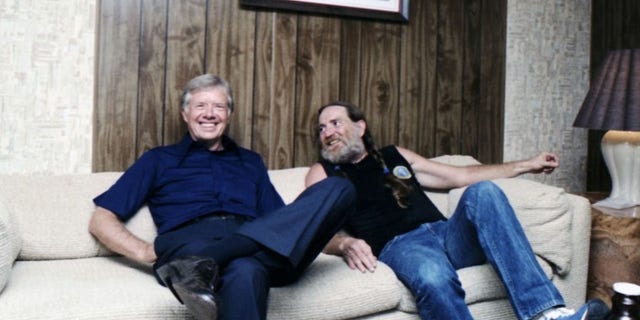 “I was doing what I really believed, and the response I think from the followers of those musicians was much more influential than the people who thought [of] that being inappropriate for a president,” he said, according to the Times.

In 2015, Carter’s son, James Earl “Chip” Carter III — now 70 years old — admitted to GQ that Nelson “told me not to ever tell anybody” about the incident involving what the “On the Road Again” singer has called a “big fat Austin torpedo.”

For the documentary, Carter III said he and Nelson headed upstairs during a break while the singer had been jamming at the White House in the summer of 1980, according to the New York Post.

“I said, ‘Let’s go upstairs.’ We just kept going up ’til we got to the roof, where we leaned against the flagpole at the top of the place and lit one up,” he said. “If you know Washington, the White House is the hub of the spokes, the way it was designed. Most of the avenues run into the White House. You could sit up and could see all the traffic coming right at you. It’s a nice place up there.”

“We leaned against the flagpole at the top of the place and lit one up.”

The other children of Carter and former first lady Rosalynn Carter are Jack Carter, 73; Donnel Carter, 68; and Amy Carter, 52.

The former president’s health has been ailing recently but he managed to make a virtual appearance to endorse Joe Biden for president last month.

Carter is the oldest living ex-president.