EXCLUSIVE: Jim Belushi is eager to blaze a trail with his latest role – that of cannabis owner.

The 66-year-old actor and comedian is starring in a new reality TV series on Discovery titled “Growing Belushi,” which chronicles the star’s life as he runs a 93-acre Oregon farm with his family.

Some of Belushi’s brands include Captain Jack’s Gulzar Afghanica, known in the ‘70s as “the smell of SNL,” as well as Black Diamond and Cherry Pie, which he describes as “the marriage counselor.”

“I just thought that this was something that nobody’s ever seen,” Belushi told Fox News on what compelled him to allow cameras to follow him, his family and employees around.

Belushi shared that he is a strong believer in the medicinal benefits marijuana can provide to those seeking alternatives to help them cope with several health woes, including anxiety, sleeplessness, and Alzheimer’s.

“It’s nonviolent,” he explained. “It also leads to a higher consciousness, which leads to compassion and empathy for others. I mean, that’s all part of the wellness of cannabis. I’ve learned all that. We show it on ‘Growing Belushi.’ It’s really cool. And the show is very funny because I’m an idiot. You’re watching my education in farming and cannabis and some funny stuff.”

Belushi’s passion for his farm is partly fueled by a personal tragedy.

His brother, John Belushi, passed away in 1982 at age 33 from a drug overdose.

Jim Belushi believed the “Saturday Night Live” star was likely self-medicating to address head injuries he suffered from early on in his life.

“My brother, I think, suffered from CTE,” Belushi explained. “He was a middle linebacker, captain of the team, all-state and all-conference. And he banged his head for four years. He got the most tackles in our high school and he got his bell rung a lot. There [were] a lot of concussions. And back then, they’d say, ‘What’s the matter? You got your bell rung? Get back in there Belushi.’

“Senior year he seizured in our home, and we didn’t know what it was,” Belushi recalled.

Belushi previously told the Alchemy podcast that despite spinal taps and X-rays, doctors couldn’t determine the cause of his sibling’s seizure. According to Belushi, it was during college that “cannabis was medicine for him.” But at the time, marijuana wasn’t recognized as a legal treatment option. 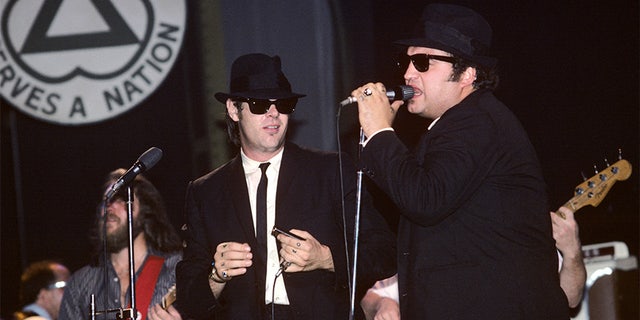 Dan Aykroyd and John Belushi performing with The Blues Brothers at the Palladium in New York City on June 1, 1980.
(Ebet Roberts/Getty Images)

“It was all considered one drug,” he remarked.

“But I believe what Dan Aykroyd says: ‘If John was a pothead he’d be alive today,’” Belushi continued. “And we think the medicine could have really helped him with that CTE, that suffering. That’s one of my purposes.”

Belushi’s farm offers the “Blues Brothers” brand of cannabis products, which pays homage to the 1980 film starring John and Aykroyd, 68.

Belushi believes he’s onto something.

He described how he visited a dispensary in Western Oregon where he encountered a veteran who truly made him realize that his unlikely path into farming was worth it.

“He looked at me,” Belushi recalled. “I said, ‘Are you all right?’ Then he just looked, stared at me. And he said, ‘I was in Iraq. I was a medic, and I saw things that happened in the human body that nobody should ever witness.’ And he said, ‘I have PTSD. They say I have triple PTSD, and they gave me a bottle… of Oxycotin… to help me. I got off it, and I have trouble talking to my wife and my children and sleeping.’”

“And he said, ‘Your Black Diamond is the only thing that relaxes me enough to take away the terror in my heart and talk to my family and sleep,’” Belushi continued. “He hugged me with tears, and I said, ‘I didn’t make this.’ He goes, ‘No, but you’re the steward.’ That was the point where it all changed for me. There are so many people suffering out there. Trauma… number one fear in life is death. The number two fear in life–collapse of family. And families collapse from alcoholism, from divorce, from someone who dies in their family. Like my family–it totally collapsed my family.

“We all have trauma that’s… screaming inside… All I’m saying is from my experience with veterans especially is that cannabis is safe, clean and peaceful… That veteran changed my life.”