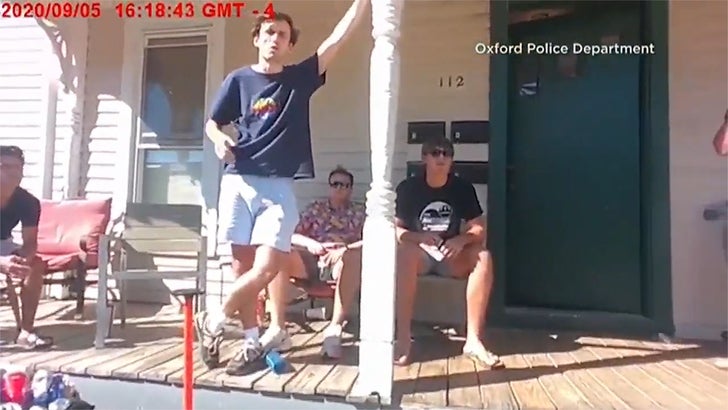 College kids really are feeling COVID invincible … as one absolutely shocked police officer discovered at a house party thrown by a bunch of guys who know they have the virus!!!

The Oxford Police Department says it cited 6 men who were at the daytime rager at Miami (OH) University … one of whom admitted, on camera, he’s supposed to be in quarantine. Apparently, they haven’t covered that word in class yet.

As you can see in this body cam footage, the officer was blown away at the student’s admission not only he had COVID, but so did everyone else living in his house. Let’s just say the kid was struggling to get the point of quarantine.

Cops say 6 of the partygoers were hit with $500 fines for the gathering — which included people from outside their house.

What’s happening at Texas Tech. Side note, I do not know this girl but she was brave enough to post this for others to see! If you are selfish like this with no regards for others safety, fuck off! pic.twitter.com/8K3G85Zkxk

As we told you … Texas Tech is dealing with a similar situation where a young woman who allegedly attends the school flippantly admitted she had the virus as she partied next to lots of other students.

Miami University says more than 1,000 students have tested positive for COVID-19, including 55 cases Monday, but the school is still on schedule to start in-person classes Sept. 21.

The officer in the video says it best … they’re struggling to keep their town open, and students like these aren’t helping matters.

2020-09-11
Previous Post: The Church For People Who Are “Spiritual, But Not Religious”
Next Post: The Nutcracker Fail Army Edition – reaction