An anti-masker with an attitude refused to leave an Orange County, CA grocery store, saying she was determined to serve the store’s manager with a fake Dept. of Justice document, accusing the store of violating the law by requiring masks.

The woman clearly doesn’t understand she’s not “serving” a document … rather, she’s pushing a phony flyer and other docs she claims are from the DOJ.
The Dept. of Justice has issued several warnings about these fake documents — some embossed with the DOJ emblem — which purport to say people with disabilities don’t have to wear masks.
Fact is … the courts have not squarely ruled on whether people with disabilities can enter private stores without masks. In normal times, they might have a case, but given that the coronavirus doesn’t overlook anyone, it seems likely a court would rule in favor of public safety. 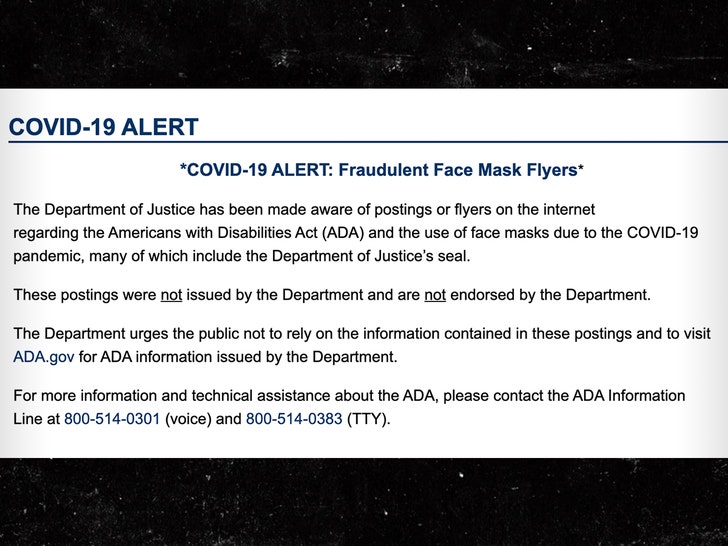 These fake DOJ cards are floating around the Internet, and various people have tried using them to gain entry to private business without wearing masks. For the most part, store owners aren’t buyin’ it.

2020-08-30
Previous Post: Camping is loads of fun, and other lies told by your parents
Next Post: Meghan Markle ‘disappointed’ Kate Middleton skipped meeting her months into relationship with Harry: Book